How Women and Togetherness are Re-robing Mount Kenya in Green 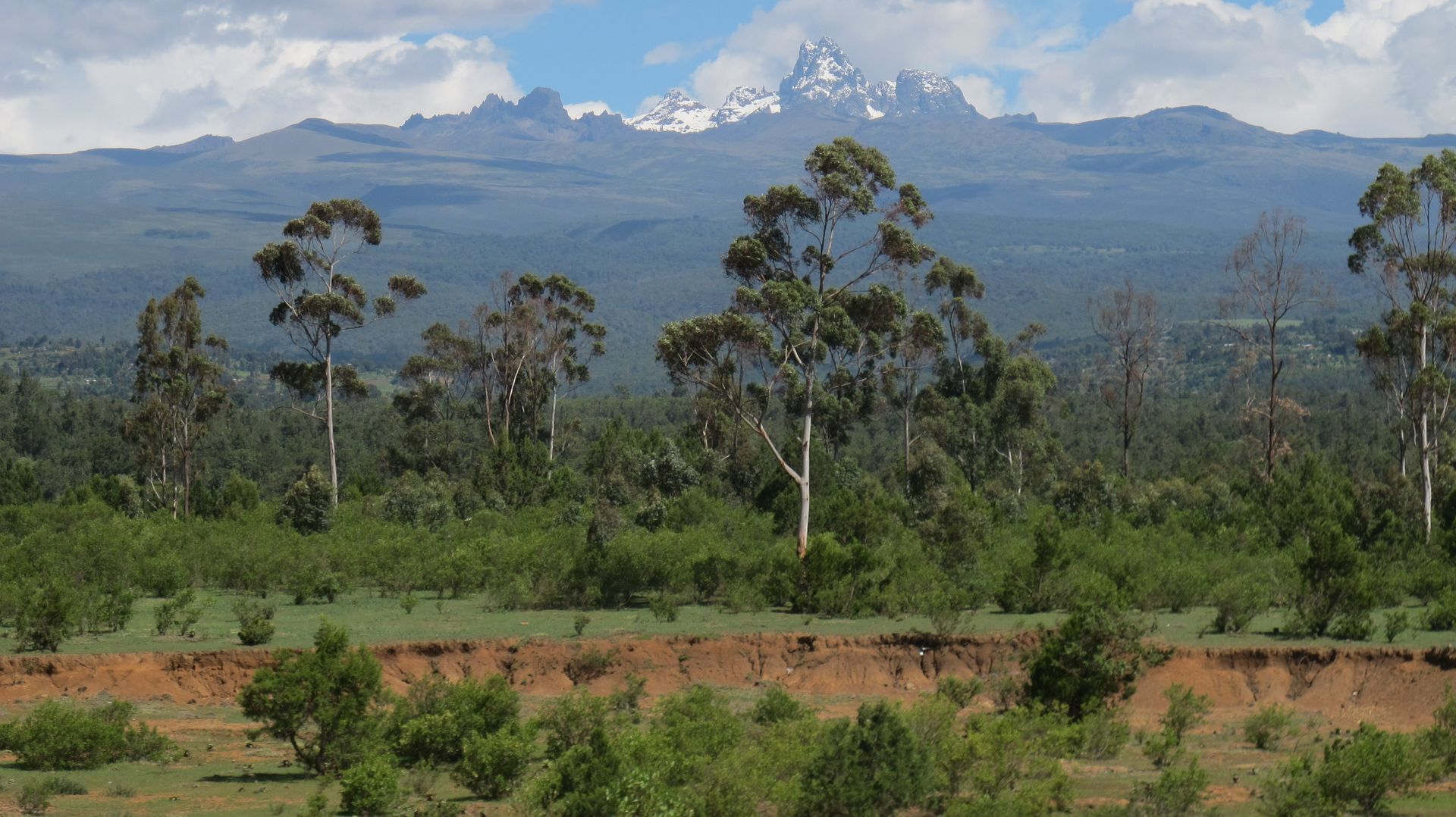 From 1976 to 1982, large influxes of landless and impoverished people settled in Mount Kenya's fertile foot zone, causing the population to increase from 50,000 to over half a million people. (1) Since then, an increased demand for wood for local domestic and industrial uses, as well as space for land development, settlements, and cultivation, have put Mount Kenya under serious forest cover loss. The continuous belt of montane rainforest, which used to encompass Mount Kenya's foot zone between 2,000 to 3,000 meters, has been breached in the North. Most of the natural forest in Lower Imenti has been destroyed and is now under crop cultivation. Large cleared areas speckle the montane rainforest belt as they have not been re-planted yet due to several attempts at an ineffective sylviculture shifting cultivation scheme. (2) Ultimately, Mount Kenya's aquifers are depleting, due to the increased demand of water combined with the effects of deforestation.

Without its montane rain forests, perennial ice and snow, Kenya which is a country with low natural water endowment would become a desert.

Where the Samburu and Maasai pastoralists probably never experienced water shortage due to their nomadic way of life, Kenyans are beginning to experience water scarcity. Several of Mount Kenya's once perennial rivers now have prolonged periods with no flow since the 1980s. The Tana river which supplies about 40% of Kenya's population with electricity and about 95% of Nairobi's water (3), is experiencing increasingly critical low flows. One of Mount Kenya's glaciers, Lewis Glacier, is already completely lost. And yet, glaciers are important as a water supply for the population which lives downstream. The problem is exacerbated by global warming that is possibly boosted by a higher frequency of El Nino events. The El Nino-related 2016-2017 drought led to over 3 million people in need of food aid, it affected "the big five" animals in the parks and numerous herds in the plains, as well as fostered conflicts over water.

Even though these issues persist, Mount Kenya's montane rainforest plays a critical role in water catchment functions. It has a special ability to capture atmospheric moisture making it one of the five "water towers" in Kenya. The rainforest in the highest mountain in Kenya intercepts fog and cloud droplets, as well as the rains provoked by the humid air mass hitting Mount Kenya releasing precipitation when the air elevates and pressure reduces.

Recognizing the importance of Mount Kenya's ecosystem and the environmental and socio-economic challenges, the KFS started to put forest-adjacent farming communities at the heart of the reforestation effort. As explained in Grace Laird's blog to reforest Mount Kenya's Forest Reserve, one solution found was to "move the forest to the farm"; the women who heavily depend on trees for firewood to feed their family would no longer have to walk long distances to collect and carry back home heavy loads of wood from the Forest Reserve, crossing the path of elephants. Another solution that was initially tested and proved successful was to involve the forest-adjacent dwellers, organized in community groups, in the reforestation.

A project funded by the UK-based Charity TreeSisters, held and coordinated by the UK non-profit organization International Tree Foundation, aims to restore Mount Kenya's montane rainforest. The project is interconnected and benefits from ITF's multi-faceted initiative "20 Million Trees for Kenya's Forests" - a Queen's Commonwealth Canopy project. It also forms part of a wider strategy by the Kenyan government to meet reforestation targets under the COP21 Paris Climate Summit and the UN's Sustainable Development Goals. The project is mainly funded through TreeSisters by a participatory financing at the grassroots level, through a global network of women.

The project aims to rehabilitate areas of destroyed Afromontane rainforests. The goal here is to plant semi-natural forests with a variety of native trees, which would eventually become with time natural forests. Forest restoration will help replenish and maintain watersheds, while reducing soil erosion by restoring the natural forest ecosystem. This will also positively benefit the livelihood of the local communities, stabilising water flows for household use and irrigated farming for communities around the forest and further downstream.

Forest restoration is taking place in the Mount Kenya Forest Reserve (4) managed by the Kenya Forest Service (KFS). The area is under Natural World Heritage Site designation, on areas designated for regeneration of degraded forest. TreeSisters is currently funding the restoration of 2,827 hectares within 3 different sites - equivalent to 4,000 soccer fields or the size of Amsterdam Airport Schiphol. We fund forest restoration in: 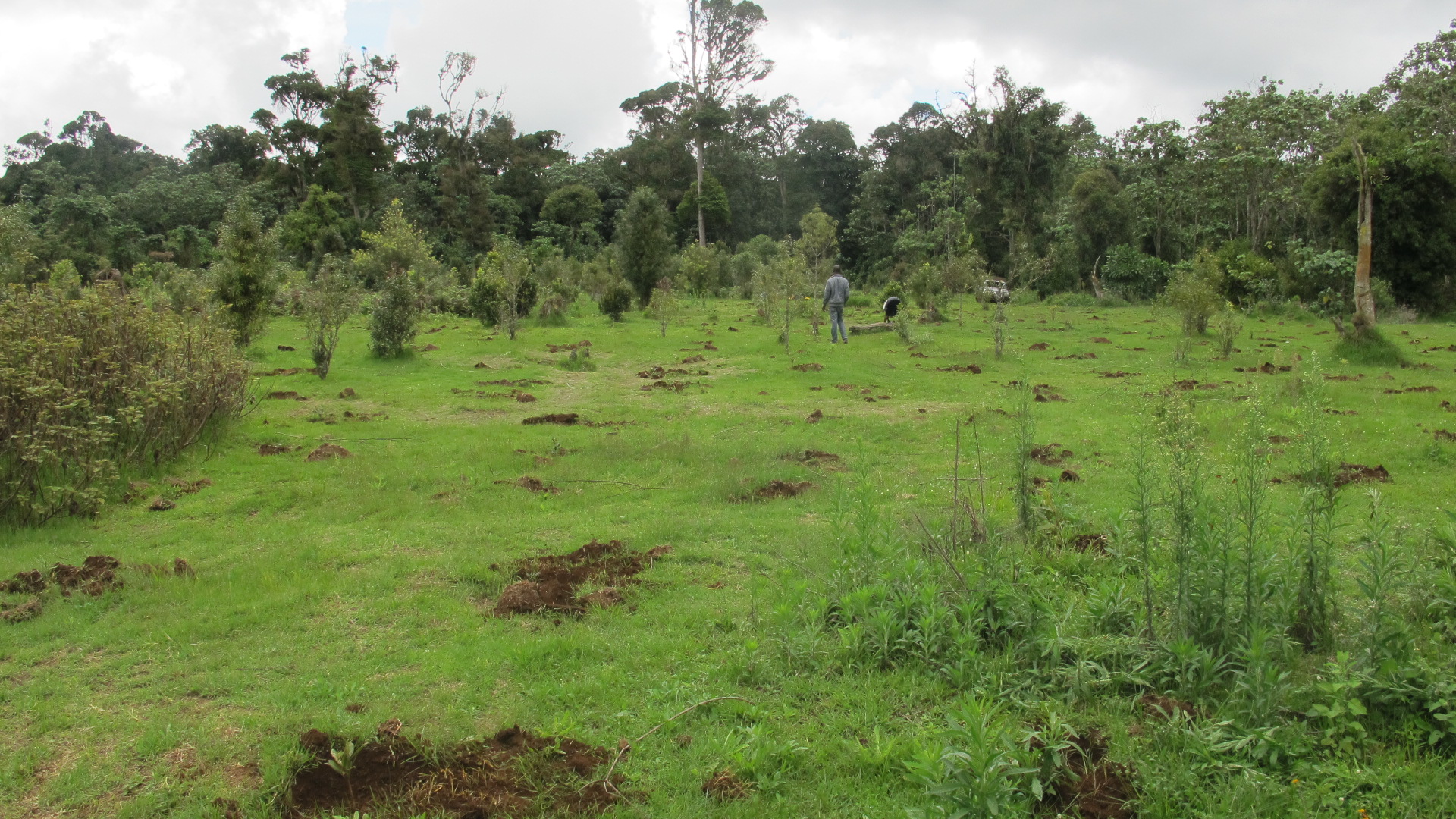 Forest restoration is done through the work of community members, either in the form of Self-Help Groups or groups affiliated with Community Forest Associations. Their work is supported by local non-governmental organizations - Mount Kenya Environmental Conservation (MKEC) at the Magaca and Mount Kenya Trust (MKT) at Lower Imenti and Kahuri. Specifically, MKT supports members of Community Forest Associations in Kahuri to plant indigenous trees through the "Tree Establishment and Livelihood Improvement Scheme", which enables them to plant trees along crops in designated areas until the tree canopy closes up. The farmers plant and take care of the indigenous trees, under important support and monitoring from MKT.

The project especially places the women at the heart of the effort as the "green agents of change". At least 80% of the community members involved in the project are women. They are deeply involved in seeds collection, running tree nurseries and planting out the grown seedlings. For this, MKT and MCEK provide women with the necessary training and support. Women also receive seeds, tools, and small equipment to run individual small tree nurseries aimed at fostering income generating activities. MCEK has started female empowerment groups and trains women on new business development skills and forest friendly income generating activities, like beekeeping aimed at conservation of the forest and creation of stable income streams. MKEC makes sure that women's voices are effectively heard in the Irangi Community Forest Association decision and activities.

Indeed, women are particularly interested in community-based projects and play a key role in environmental stewardship. Hard working and increasingly living alone with their children, they need money to meet their livelihood needs. They are able to earn an income from the projects; some of it is also lended for a low-interest rate through "table banking" groups primarily to fund school fees, cottage enterprise set up, the purchase of farming animals. But most importantly what motivates them is the opportunity for social networking and mutual aid. We report on how the project is assisting women, such as Anastasia, in our blog. 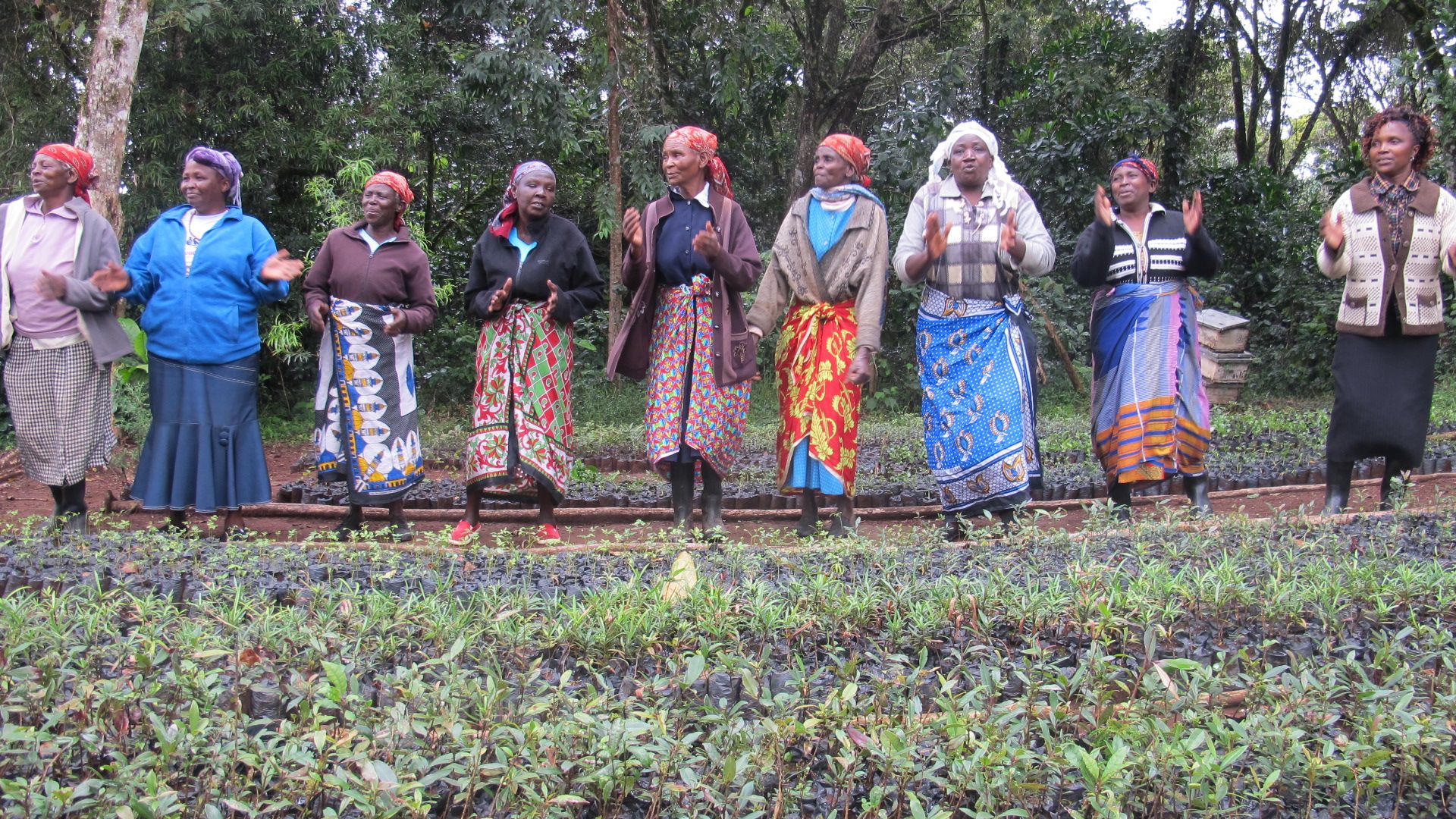 All photos by Lauriane Cayet-Boisrobert 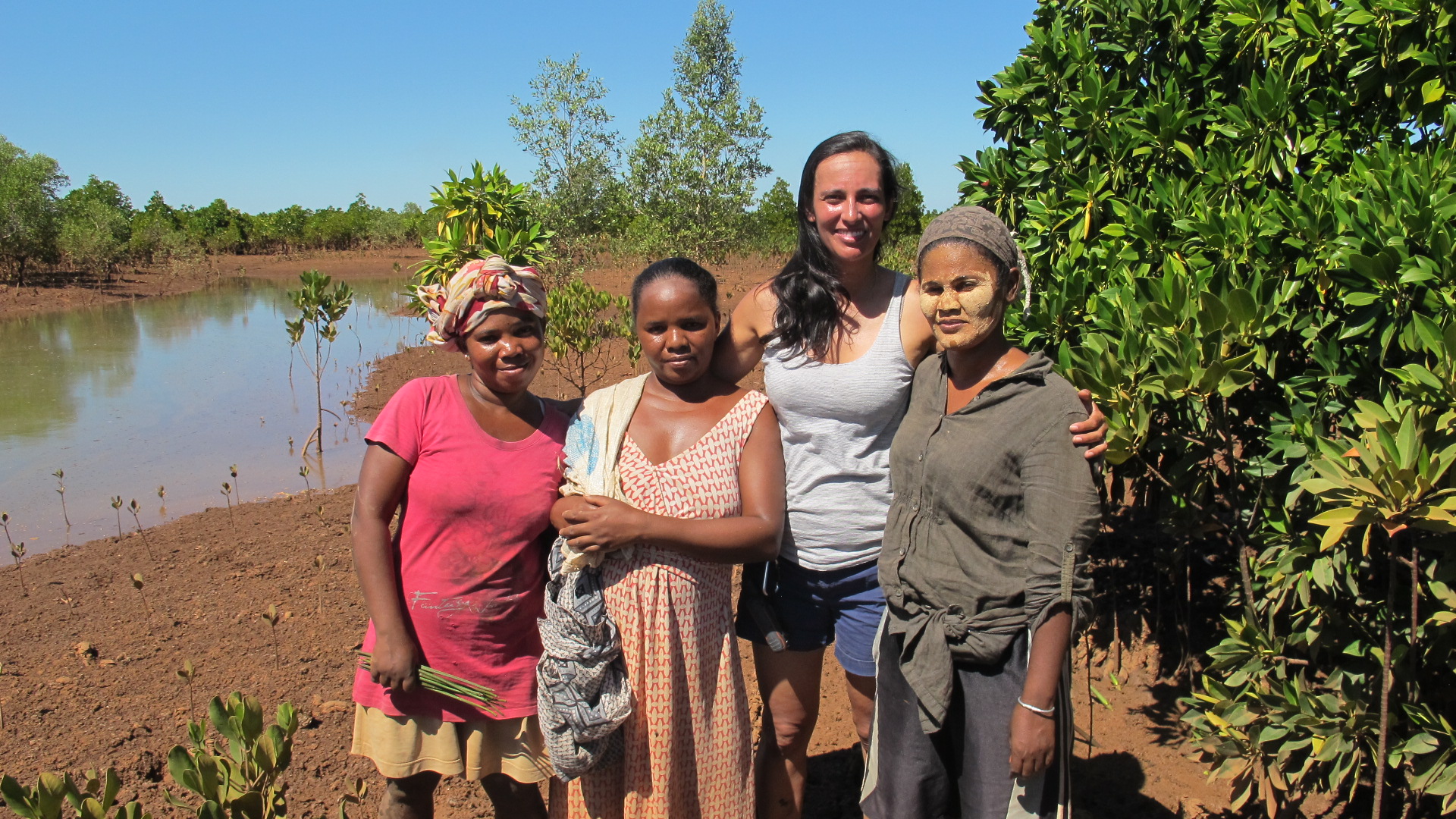 Lauriane Cayet-Boisrobert is our Reforestation Manager. She develops and manages our reforestation projects portfolio. She started by co-developing TreeSisters' forest strategy and project selection process. Lauriane is passionate about the many cultures on Earth. She tries to live in harmony with the Earth; so the Earth must stay wild and generous to us all. She feels deeply sad when the Earth is been abused at all prices, and mostly at the expenses of the people who rely on it. Lauriane is seen here with some of the women who plant in Madgascar.