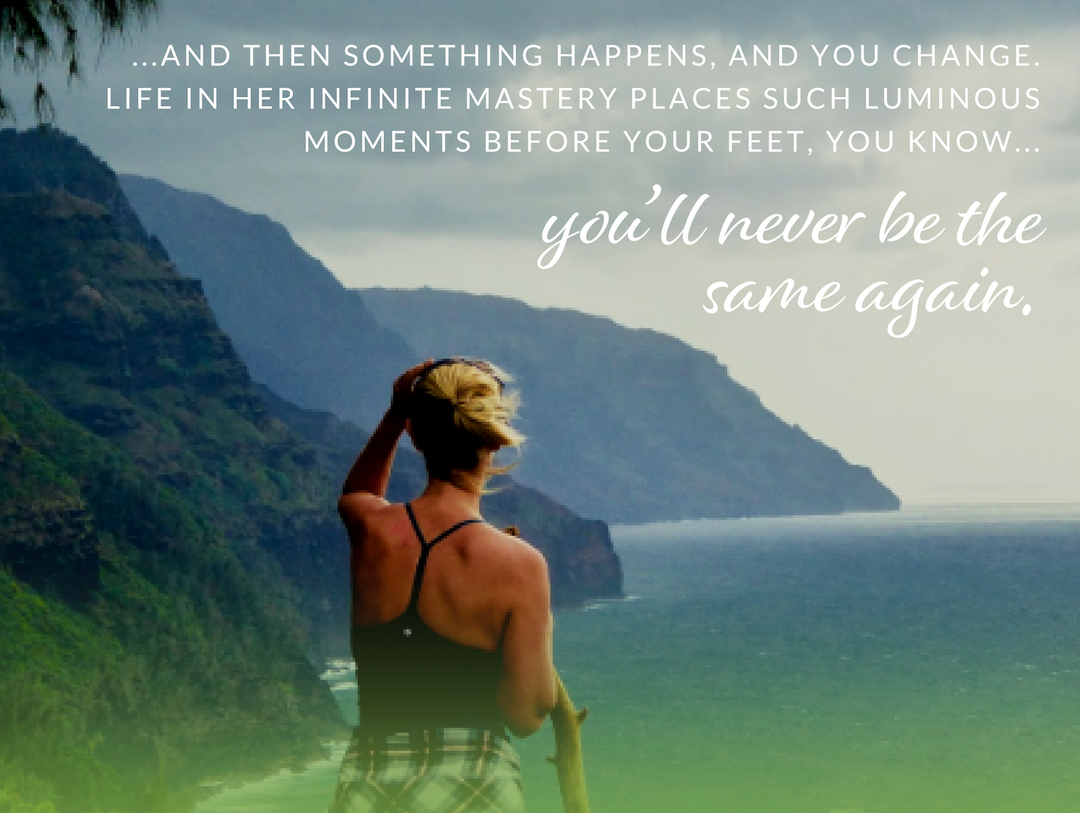 This is a first for me. I want to try to write about something incredibly personal, because I think the gift of it needs to extend beyond my own experience. I'm not sure that I will do it justice but I'm going to try. I'll offer it up as a seed to be planted into the soil of our collective consciousness in case it can grow.

We just escaped the floods in Kauai by a few short days. It feels so strange, counting yourself lucky for 'getting out in time', when many of the places that blessed us are now underwater, and new friends that we met have lost everything.

The experience was a lot on every level. The weather felt unstable, angry and confused from the moment we got there. A tropical island with temperatures in the 50's. Folks running around trying to buy heaters in a place that doesn't need to sell them. Incessant wind and rain that felt like it was trying to be heard and paid attention to. I was listening, but I was also afraid. 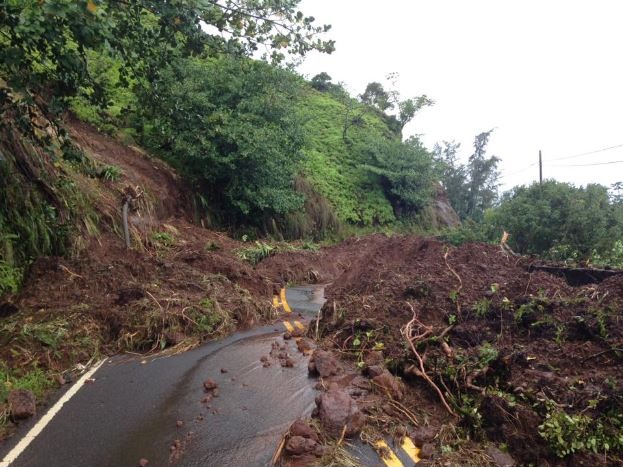 There I was, hiding from the rain, looking at images of the vast die off of sea creatures knee deep on UK shore lines, as Siberian cold snaps had their way. Watching New York go under snow again. Reading about the Gulf Stream slowing down and people seemingly finally joining the dots about the level of climate chaos that would point to, and the people around me are unsettled in a way that animals show unease before an earthquake happens. I've been weeping over the science of climate change for two decades or more, and yet as it unfolds my animal body is not prepared. More about that later...

Kauai had been calling me, and I went there fully aware that I was choosing a rebirth. I wanted to walk into the sea one version of myself, and reemerge another. I was fed up with my fears. Sometimes it is a person in our lives that shows us to ourselves so clearly that we can make a quantum leap. Sometimes it is a place, or the being of a place. For me it was a living Pacific island.

I'm not sure what I expected, but as soon as we landed I could feel Her energy. One word for it. Mother. And she was swift to introduce Herself.

I knew nothing about Kauai; the lands, the people, what had been done to them, the critically endangered species everywhere, the wild weather, the radical beauty, the sumptuousness, fragility or the feeling of being on the patch of land further away from anywhere else on the planet - and still picking up so much plastic from the beaches. 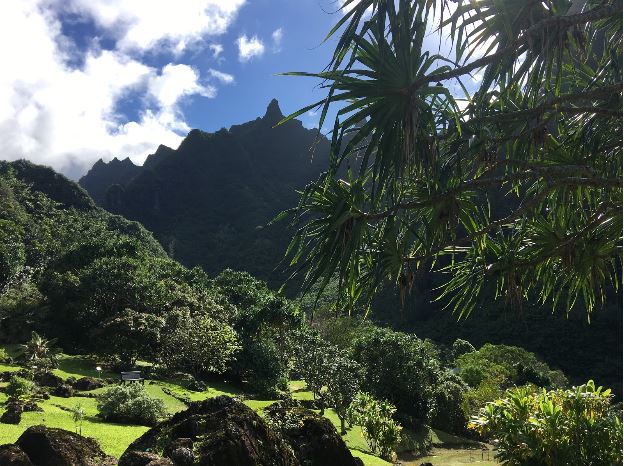 Our new friend and amazing guide Tanya, an Oregon based treesister who knew that it was time for me to come, shared her home with us and steadily began to share the history, legends, suffering, miracles and her deep love of this place. I want to share a particular moment from the fourth day of our trip.

We were on the north west coast, close to Ke'e, being taken by a friend of hers onto private land being held as a bird sanctuary; land that was ancient settlement turned forest. Taro field terraces draped across a sacred valley. Home and temple remains hugged the drenched and fertile jungle ground. To the owner, this place apparently held the first Ha'ou (Hawaiian temple) and the birthplace of Hula. All I knew was that as soon as I stepped into that forest, everything changed.

A few feet in, my eyesight shifted and I started to wobble on my feet. Light was radiating off every surface and my consciousness was getting muddled. As we climbed terrace after terrace, huge black volcanic rock walls now home of the trees, I felt less and less of this world and more and more freaked out. At one point, I simply hit a wall of light and stopped. 'The entrance to the Ha'ou' I was informed. A sacred place still so potent that it requested conscious entry. When I stepped across the threshold my perceptions split so acutely, I knew I couldn't walk any further and had to sit down. I sat between two levels in the temple and held onto my head for dear life.

As my friends continued up the valley side, I could see ripples of light radiating towards me like reverse ripples on a pond. Like I was being sensed by the place, over and over and over again. I literally started praying to the trees to hold me safe as my internal vision was taken back to witness the birth of Hawaii.

(The head, breast, belly, legs and feet of Mother Goddess Kalalea - the birthing place of souls)

A feminine presence that is totally indescribable erupted from beneath Earth's crust. I felt Her choose Her spot with radical precision, and blast through like a Goddess throwing back her head with wild abandon and laughter. She was the very embodiment of raw, uncensored, volcanic, feminine power.

I felt Her growing Her body with layers and layers of molten rock turned to muscle and bone, as if through my own body. I got to feel the vibrant consciousness alive within every inch of stone, soil, plant and water. I could feel how She senses and responds. Just how completely aware of everything She is.

Hawaiians speak about their deities as living beings of place. Beyond my limited comprehension of the elemental kingdom, the beings of Hawaii still hold much authority and if my experience is anything to go by, are still very much alive. This was the first of what I can only describe as multiple transmissions of leadership training from Pele - and yes I do sound ridiculous. But. And. I cannot unfeel what I just felt.

That wild beingness was of a level of power, intelligence and undeniability that I knew could alter the whole chemical makeup or magnetism of that island rock with a flick of Her will. She was immediate not slow, and I was left, having stumbled back down the valley and out of the forest, no longer able to relate to the apparency of climate change in the way that I had before.

Here we are, living in this weird dissociated state, when there are levels of relationship and intimacy available with the beingnesses of this planet, so profound that we have no concept of what could be possible. I'm struck again and again by the realization that we have no idea what we actually are as human beings, and by the words that I heard at the crash that gave me TreeSisters: 'Women have to remember who and what they really are - feminine consciousness has to be reinstated, or its over'. 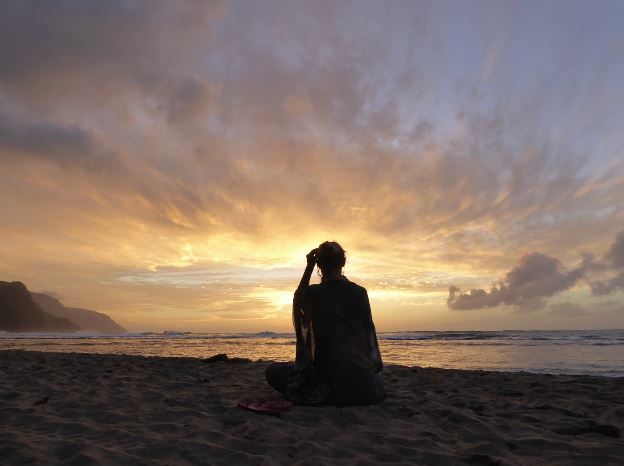 One thing is clear. We need to gather. We need that exponential potency born of collective consciousness and the intentional dropping beyond what we know ourselves to be. It's time to bow to the sacredness of all life including ourselves, in ways that we have yet to comprehend. To ask to be shown. To sit in radical humility. To let the versions of ourselves that we've been wedded to give way to who and what we are capable of being on behalf of every species and this planet in massive transition. It's time for rebirth; huge, chosen, bowed to, demanded, and we are not alone.

We can be as intimate with the beings of this world as we allow ourselves to be, through the levels of presence that we choose to inhabit in our lives. Kauai called me and I went to Her. She must have known that She had the exact medicine that I needed to shed the skin that was ready to go, but I was also clear that I wanted Her help. I feel like I am starting to grow up in a whole new way that is literally Earth led.

So can we do that? Can we consciously call forth the support and transmissions of the places, nature and beings of this planet to help show us who we really are, and how to live as HumanKind - as restorers - as architects of 'heaven as Earth' instead of hell - as the protectors of the future generations? And can we start to act like the ones that will actively restore our world whilst we discover how to shift our consciousnesses and culture?

This lifetime is a privilege beyond words and each of us has an opportunity to make it count in ways that even yesterday seemed inconceivable. Nature knows us way better than we know ourselves...how about we ask Her what we're for?

In sisterhood and for the trees,
Clare

P.S. If you would like to step in as a monthly member on behalf of the trees in a green, leafy and oxygen rich way, then you can do that here. Thank you for caring and for giving back!

P.P.S, The response to the Dream the World Green was so strong in exactly these terms through strengthening our connection to nature. We wanted to make sure you have the link to the recording, which you can find here! 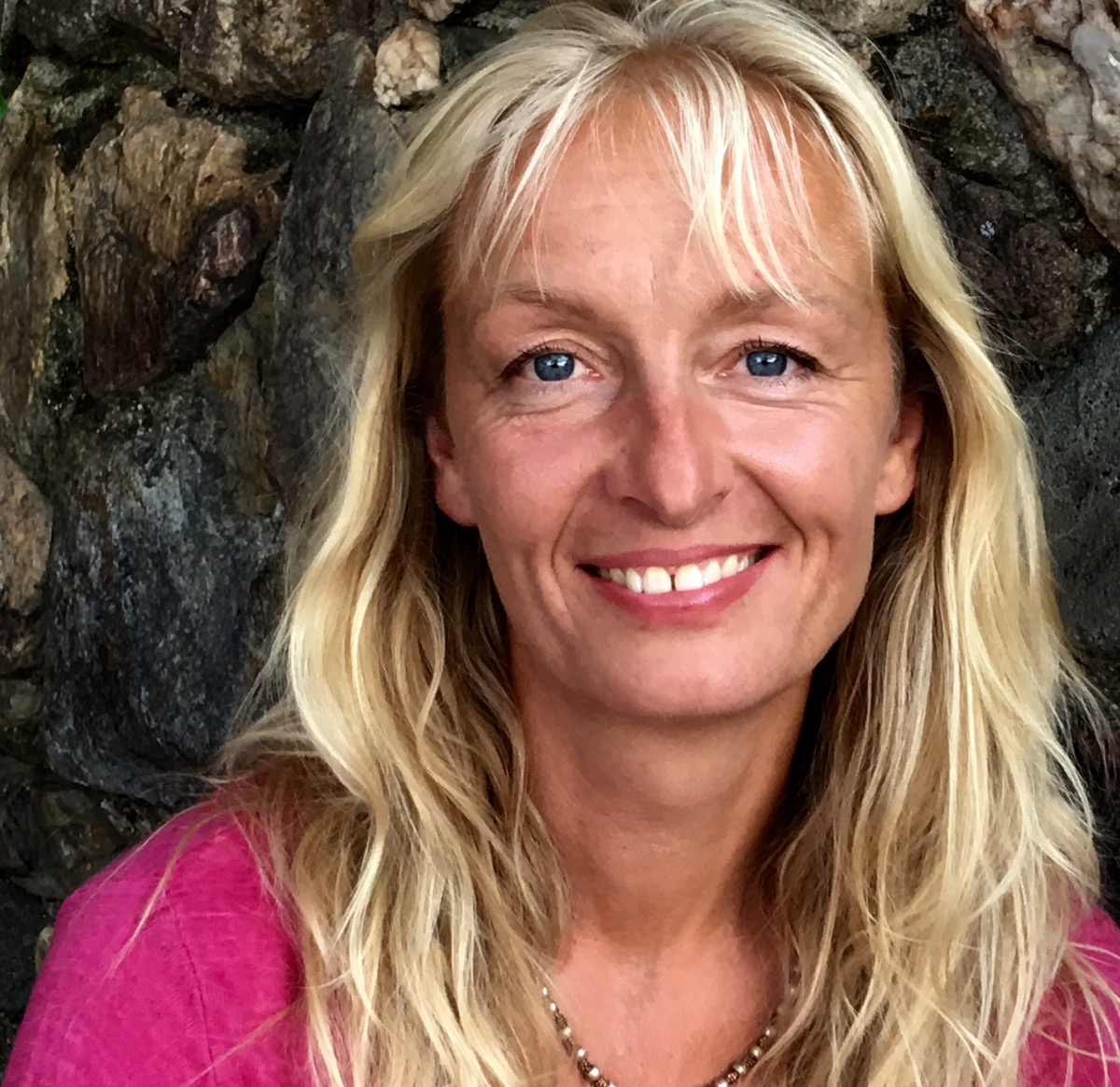 Clare Dubois, founder of TreeSisters is an Earth loving social entrepreneur and inspirational speaker who worked internationally for 18 years facilitating groups, coaching business leaders and creating behaviour change processes within the personal growth sector. Clare is leading the TreeSisters campaign; focusing on network development and the empowerment of women. She has been developing the ethos and principles, the team and organisational culture, the campaign strategy, the framework of the Maps and behaviour change materials. She is committed to the creation of an evolving system that learns as it goes and continually models itself upon the flows and forms of living systems.