La Luna: The Power of Emergence 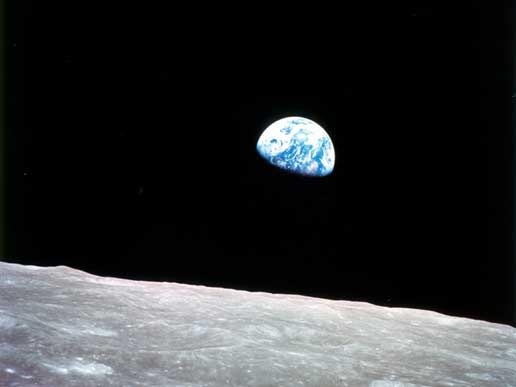 This photo was taken by the Apollo 8 crew in 1968 and was the first time we actually saw the Earth as it appears from deep space. This picture of an "Earthrise" was taken over the lunar horizon and when I first saw this image my cosmological perception shifted yet once again. Humans are so Earth-centric that it never occurred to me that from the Moon’s vantage point, it is the Earth that “rises and sets.”

In our continual quest to deepen our understanding and application of living systems within the organization, I keep asking myself, “What is it to be a woman in the 21st century, on the living planet Earth, in the Universe as we now understand it?” Following the Wisdom of La Luna is one of the ways I am exploring that question.

Several months ago we decided to apply the wisdom of the lunar cycle by using the four Moon phases as our four main creative phases at TreeSisters.  Each week of the lunar month has a particular theme that naturally reflects an important aspect of the creative process that we use as the guiding framework for our weekly core team meetings:

~The week of the New Moon is dedicated to invoking possibility, setting our monthly intentions, making new resolutions, and identifying new projects or aspects of on-going projects that require our focus for that month. It is a visionary week.

~The week of the Waxing Moon is dedicated to focusing on the growth and development of our monthly projects and goals. We also look at what is organically emerging to identify things that we might want to focus on but that were not part of our original seeding at the New Moon. It is a week of growth.

~The week of the Full Moon we put all our efforts toward the full manifestation of our monthly projects and look at our outcomes through a celebratory lens. It is a week of manifestation.

~The week of the Waxing Moon we assess how well we did, reflect on what we’d like to change, make any important course corrections, and let go of whatever might not be working.

Each week at our core team meeting we use this lunar rhythm to shape our meeting and guide our choices for the upcoming week. The more we practice this, the more I am seeing important subtleties within this creative lunar cycle I had not previously fully appreciated.

This week as the Moon waxes toward full we are typically focused on the growth and development of our current projects and initiatives, however this week I began to notice some interesting things that seemed to come out of nowhere. Because they took the form of subtle suggestions or creative flashes not fully formed, I could have easily overlooked their significance.

However this week during the waxing moon I was really paying attention to the power of emergence. “Emergence is a noun that goes back to the Latin root emergere, meaning "bring to light," and it came into English in the 17th century. Just as something comes to light or shows up where there was darkness or nothing before, an emergence happens.” (source: vocabluarly.com/emergence)

At the New Moon all is dark and as we look up at the night sky we even sometimes say, “There is no Moon tonight.”  Yet, in reality, we know that even if we do not see the Moon it is still present. We “don’t see it” because it lies in the same part of the sky as the Sun and its illuminated face is away from Earth. But we trust it is there and will emerge again.

Day by day the Waxing Moon reflects more and more light as it rotates around the Earth.  When it is in its full phase it lies on the opposite side from the Sun and its illuminated side faces the nighttime hemisphere of the Earth. During the waxing phase we say the Moon is emerging again and yet, in reality, it has been there all along. The illumination of what was there all along, but previously unseen or unrecognized, is not only part of the lunar cycle. It is an essential and magical part of the creative process. This part of the creative cycle is called emergence.

Emergence is how living systems change and is grounded in the belief there are things not consciously known or planned that want to come into being. They do not require our effort, manipulation, or permission. Though we do not perceive them, they already exist – like an Earthrise and the New Moon. Under the right conditions they begin to come topside with a life all their own. Our role is to pay attention – especially during the Waxing Moon – to what wants to come alive and to nourish it. The Wisdom of La Luna tells us that there is more to our creative lives than what we invoke and plan; more than what we can envision.

There are invisible seeds we didn’t know about that are germinating below the soil; reaching for the sunlight of our attention. May those things be brought to the light and emerge in gorgeous and unexpected ways during this Waxing Moon. 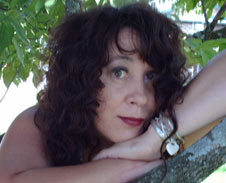 Edveeje is the Director of Operations for TreeSisters.  She lives off-grid on ten acres of raw mountain land in the Mother Forest of Southern Appalachia where she is passionate about the power of place and how our relationship to Nature can infuse, inspire, and call forth, not only our souls, but our part in the Great Turning.