New project in the Brazilian Amazon! 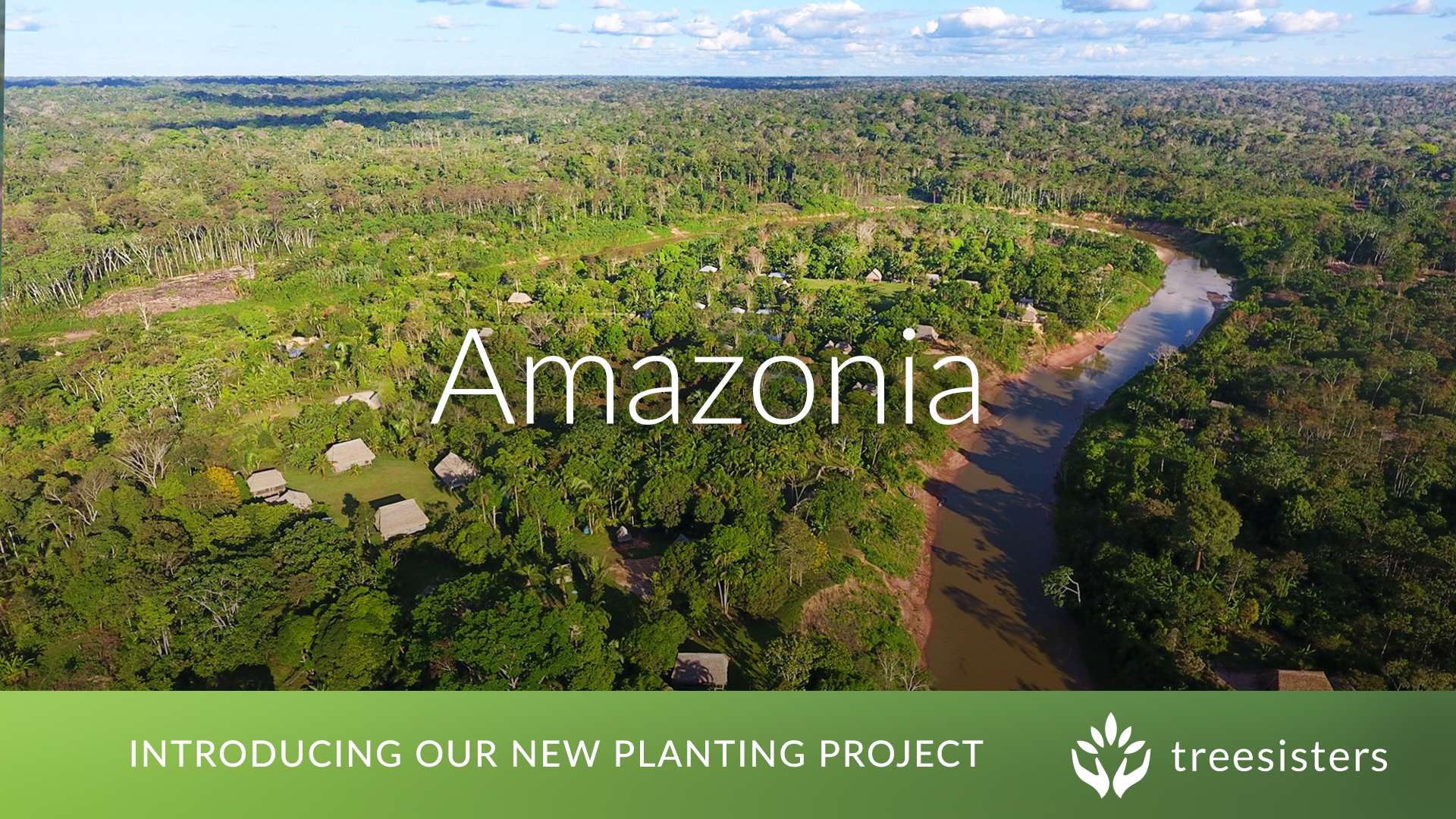 We are very excited to announce that your donation will now support a reforestation project developed by an indigenous leader from the Ashaninka people who live in the depths of the Amazonian forest basin.  It is brought to us by Aquaverde, a Swiss non-profit organization, who will ensure good communication, liaison and reporting according to our Western standards.

The Yorenka Tasorentsi community and members of the Ashaninka community will grow a ‘forest garden’ in the Brazilian Amazon based on their philosophy of life. The Ashaninka have managed their forests sustainably for millennia through their strong cultural heritage, high dependency on forests for their livelihood, and the spiritual value of the forest. This project is therefore a replica of their way of life to continue living a healthy and wealthy traditional lifestyle. The Ashaninka's sustainable resource management and wisdom can inspire others to create similar projects, helping to save the Amazon rainforest, and other forests, from destruction. 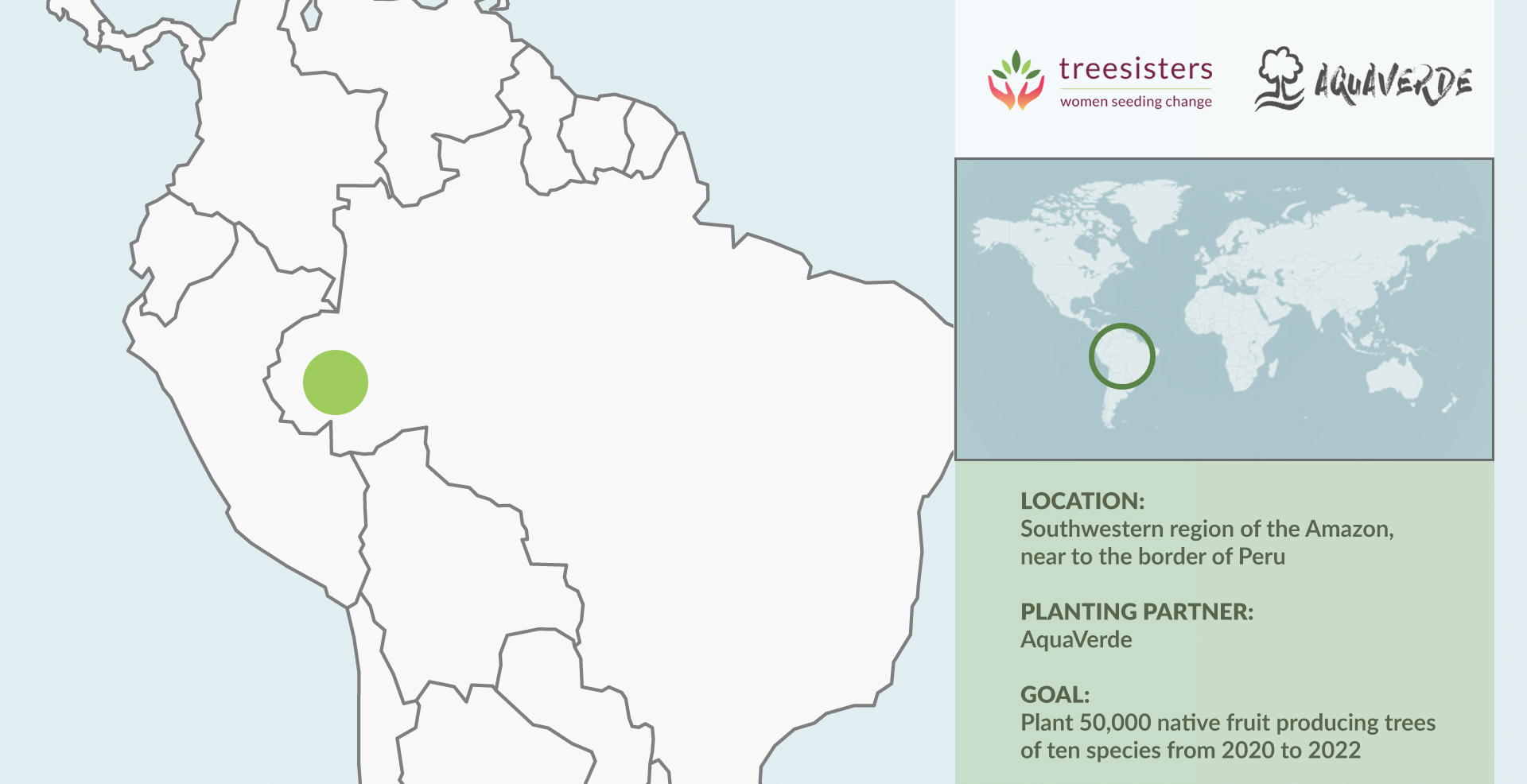 The project is located in Southwestern Brazil at the border with Peru, in the State of Acre, on the edge of the town of Marechal Thaumaturgo. Planting will take place on land which belongs to one of the Ashaninka spiritual leaders - Benki Piyãko - for the benefit of not only the Ashaninka community but also other indigenous and non-indigenous communities living along the Jurua basin. The land was purchased mostly through external donations, and also through income generated by Benki’s actions for the Earth, including a National Human Rights Award in 2017 in recognition of his people’s fight to defend their territory.

The Ashaninka live their peaceful way of life away from the tribulations of our modern exploitative world - about 40 km from the project area. They live on indigenous territory called ‘Terra indigena Kampa do Rio Amônia’ demarcated in 1992, thanks to the actions of Benki’s father, the local community chief. The land is only accessible by small motorised boats for authorised people only and is a six-hour journey. Their indigenous territory is covered with primary forest.

One of the most remote tribes of the Amazon, the Ashaninka are one of the largest indigenous groups in South America - between 45,000 to 70,000 people depending on the source. The great majority are found in Peru. Some, such as the Ashaninka of ‘Terra indígena Kampa do Rio Amônia’ (about 1,000 people) live in Brazil.

The Ashaninka have a long history of resistance. Originally from Peru, they pre-date the Inca empire, which sought to conquer the Amazon forests and their inhabitants. They fought against the Spanish conquistadors and the incursions into their land from non-indigenous who came for the rubber boom.

They are still living with great autonomy and strong culture, traditions and rituals.  They continue to live in a traditional way: drinking water from the river or wells, hunting, and farming, where prosperity is measured not by economic wealth, but by the spiritual and physical health of people living in harmony with the land

The Ashaninka people have a cultural and traditional heritage that has been preserved through millennia, This heritage is passed on through families, via designated shamans, who are responsible for the health of the people and the environment.

When I asked Thomas Pizer (Director of Aquaverde who has lived among the Ashaninka) about the place of women  he replied that this is an odd concept to them. Women and men are both in service to the community. They have different roles, but they are equally valuable for the community. Women in the community take care of the children and prepare food as a group, whilst the men hunt, fish and farm as a group, to feed the community. 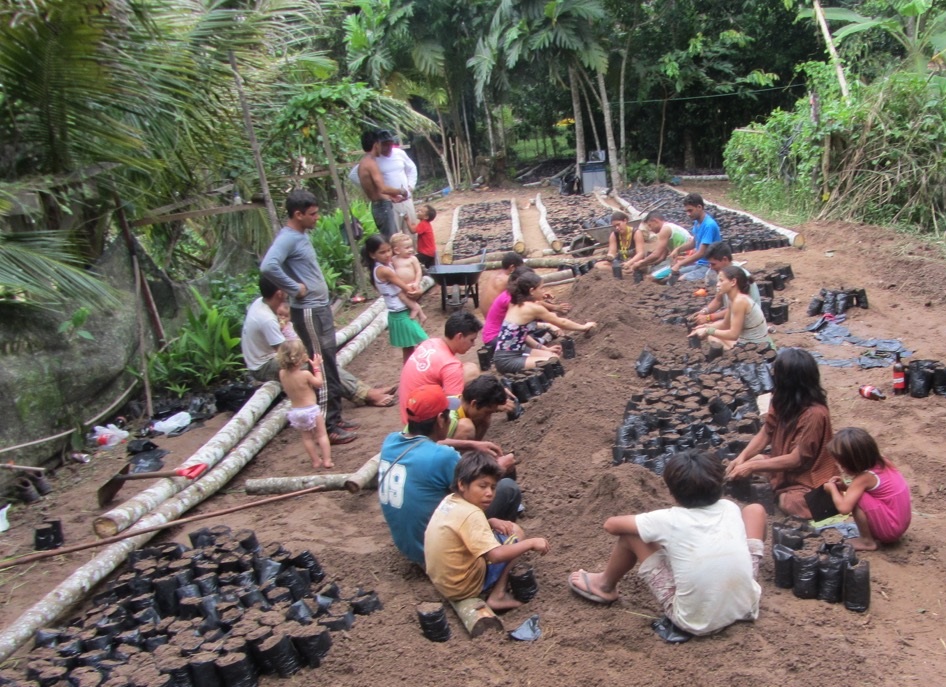 No role or job is degrading or demeaning. Personal income is also a strange concept as money circulates for the benefit of the whole community and everybody is in service to others. When someone moves away from this principle, the whole community will make sure this is understood, and bring the person back with the use of humour.

Living from a place where community holds the most importance to everyone makes great deal of sense to me and I think that's very similar to TreeSisters in the way that we want to make it normal for everyone to give back. Additionally living this way allows for women to be able to give their gifts to the Earth without the limitations that are often placed on women by money or men.

Benki Piyako of the Ashaninka

Benki Piyãko was born in 1974 of an indigenous father (also community chief) and a non-indigenous mother whose family arrived during the rubber boom. Benki has been fighting for the preservation of Nature and Ashaninka cultural heritage since he was a child. He was designated and trained from a very young age to become a community shaman - someone who holds and transfers the Ashaninka ancient knowledge, traditions, and traditional medicinal practices.  (Above: Video from the Flourishing Diversity Series in October 2019 featuring Benki Piyako) 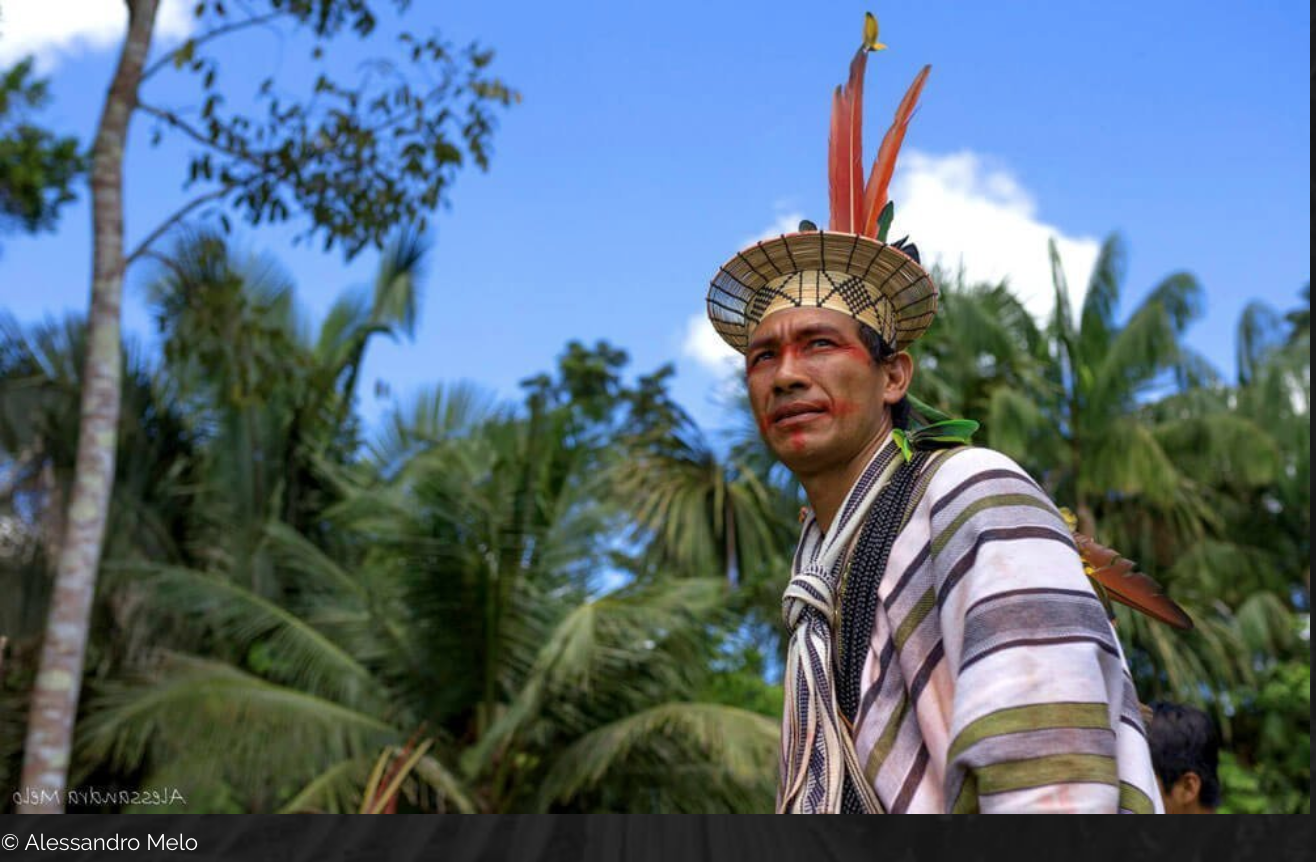 In 1992, at the age of 20, Benki created the Apwitxa Association, named after the village where he grew up. It aims to preserve the Ashaninka’s integrity and local biodiversity. Projects include forest restoration and the creation of agroforestry systems for greater food and economic self-sufficiency. Apiwtxa projects have planted about 2,000,000 trees to date.

To maintain the strong cultural and traditional heritage of the Ashaninka, Benki Piyako has designed a project called ‘Yorenka Tasorentsi’. It is part of a 40-year vision to share the Ashaninka ancestral wisdom and values for a better future for the Earth.

It is essentially designed to support a robust Ashaninka community to perpetuate their healthy and wealthy way of life (in the traditional sense) in the face of external pressures - with jobs and revenues, nutritious foods and quality drinking water, as well as medicines from the forest. It will also inspire other Amazon tribes and non-indigenous people who face broken environments because of broken relationships with the environment.

Through the Yorenka Tasorentsi  Reforestation program, TreeSisters will establish a forest garden across 10 hectares of deforested land located on the edge of Marechal Thaumaturgo. The goal is to plant 50,000 native fruit producing trees of ten species from 2020 to 2022. There is a possibility that we could plant more trees with them after 2022 if the Ashaninka succeed in acquiring more land. This would be needed to keep up with their plan to plant 10 million agroforestry trees over the next 10 years.

This project is being implemented by the Yorenka Tasorentsi community (comprised of Ashaninka, indigenous and non-indigenous peoples), (2)  whilst Aquaverde is responsible for communication (including translation) and reporting. Aquaverde has a long history with indigenous people. Since 2005, they have supported the Surui tribe to replant 7% of their degraded forest lands with over 250, 000 trees. Aquaverde has engaged with the Ashaninka since October 2017, at the  invitation of Chief Raoni (Gayapo People).

The forest garden aims to: (a) generate fruits and nuts, providing sustainable nutritious food to the non-indigenous locals in the town of Marechal Thaumaturgo and to the people involved with or visiting the project; (b) facilitate other indigenous people to reclaim their values and traditions, by changing the perception of project visitors about Nature, agriculture, and about indigenous people.

This will ultimately lead to: (1) improvements in the health of both indigenous and non-indigenous surrounding communities; (2) a reduction in deforestation in the Amazon; (3) perpetuation of Ashaninka cultural, traditional and spiritual values.

Project activities include: (1) agroforestry training for 70 young men and women; (2) an awareness program involving indigenous people from other parts of the Amazon and non-indigenous surrounding communities; (3) reforestation work (seed and materials procurement, nursery raising and maintenance, plus tree planting and maintenance). 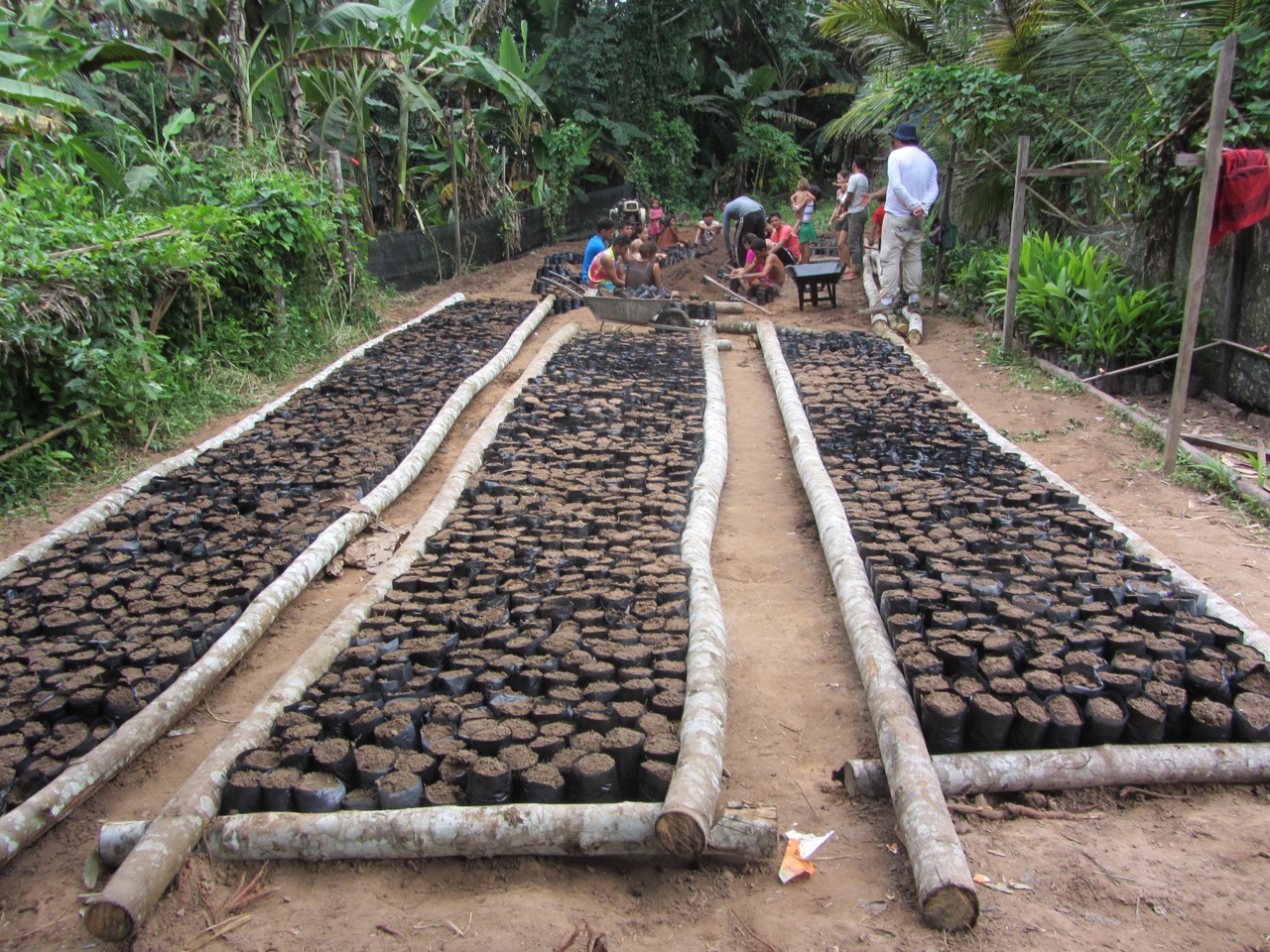 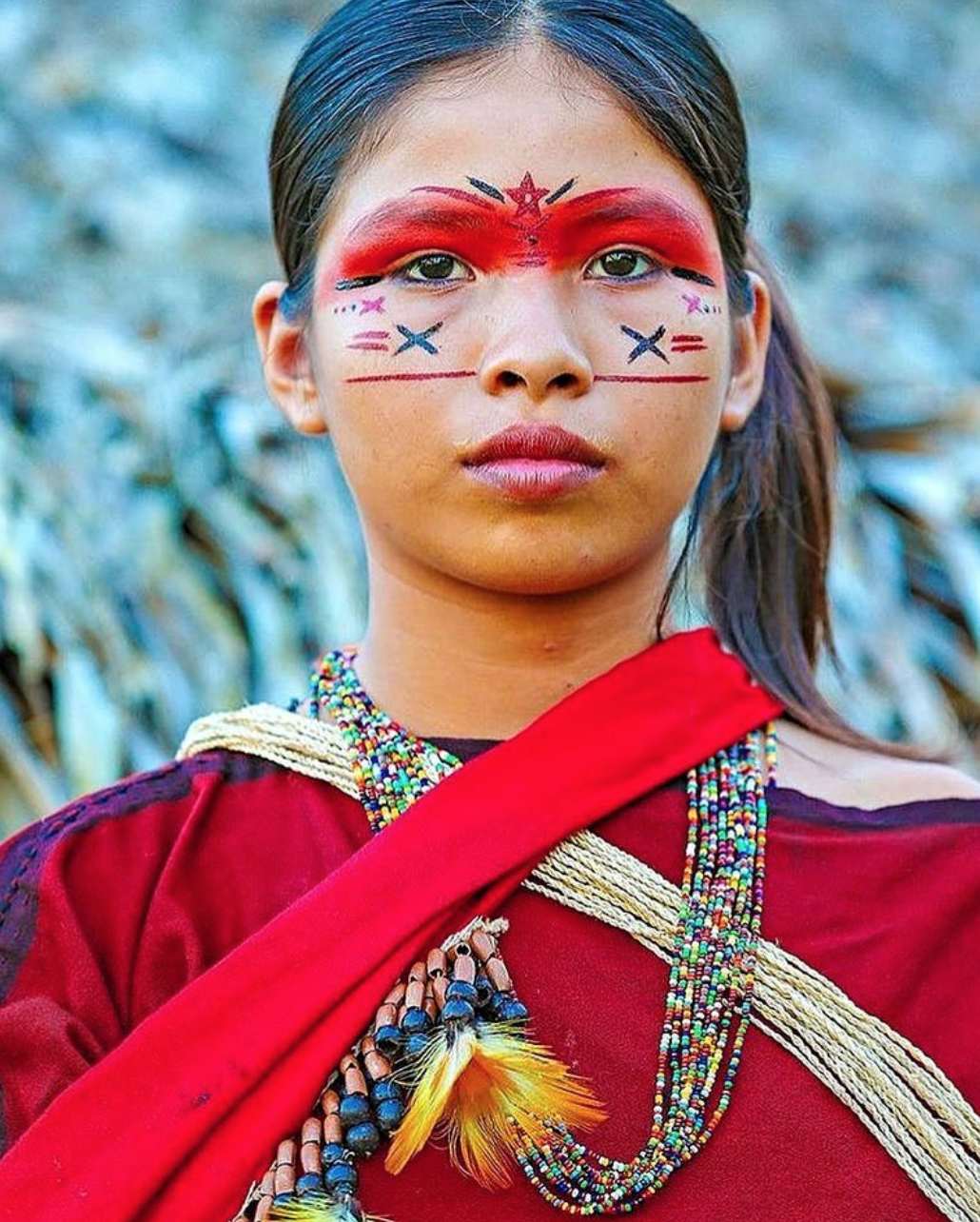 If you would like to support this project and our other planting projects around the world, please join Treesisters as a monthly member. Every contribution makes a difference.

(1) From Thomas Pizer, President of Aquaverde from his conversation with Chief Almir Surui.

Thank you for making a difference! Your gift will fund the planting of tropical trees, sequestering carbon and directly help replenish the world's forests