One Woman's Wild Jungle Journey Back to the Roots

When I was a little girl, I spent many hours reading books. I would lose myself in the imaginary world of the books. I was particularly fascinated by old tales about sailors and pirates, who sailed the seven seas and stranded on tropical islands where they faced the battle of survival. I often fantasized how I myself would be a cool pirate with a flint gun, a saber and a strong mind, who sailed round the world on a big old fashioned wooden ship. I wished to steal from the rich and give to the poor. There was just one little problem; I was vegetarian and I was not able to hurt a fly. This did not seem to fit with my idea of the wet world of rough pirates. But it didn't stop me from dreaming. Sometimes dreams come true.

When I had just turned 19, I left Denmark to see the world. After 2.5 years of traveling I was staying in New Zealand. I got the idea of hitchhiking back to Denmark. I did not want to fly anymore, as it's not good for the environment. 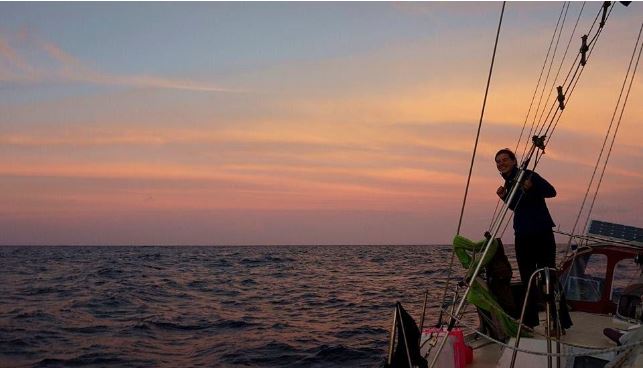 I packed my backpack and headed north to Whangarei to find a sailboat which could bring me to Asia. Within an hour after arriving in Whangarei I met a cheeky, adventurous woman from the Netherlands, who had a boat and wanted to sail. She however did not have much experience with navigating nor sailing for that matter. Within a week we formed a group of six people from all corners of the world. None of us knew each other beforehand. We started to work intensively in order to make her boat ready for the long voyage. Our goal was to reach the World Rainbow Gathering 2017 in Indonesia. We decided on a route to take by flipping a coin. It was a pure Monthy Python circus trying to work together. After 2 extremely fun and dusty months, we decided it was time to finally set sail to distant shores. None of us had much experience regarding sailing and it turned out that everyone got seasick except me. Despite the seasickness and some other technical setbacks, we safely reached New Caledonia as planned. We had no money, so we played music at various markets and hotels and dumpster dived most of our food. In this way, we got the finances for our onwards journey to Vanuatu. After 7 months living together, the 11 m steel boat started to feel rather small. It was time to move on.

While I was unsure about my next move, I fell in love with a native Ni-Vanuatu man, Will, who lives on one of the islands of Vanuatu. I moved in with him in his little bamboo hut in the jungle. We got a cat, 4 naughty puppies and 20 chickens. We cooked over fire, walked barefoot everywhere, swam and washed our clothes and hair with lemons in the river. For 7 months we lived a simple life without worrying about money, rent, electricity bills, selfies, fidget spinners, Facebook updates and the like. What we didn't have, we would trade for, but we did not need much. We got our salt from the ocean and we could grow all our food ourselves or find it in the forest.

In Vanuatu the land is passed on from father to son so everyone has access to their own piece of land where they can grow all they need to sustain themselves and their families. All the basic needs are therefore covered; Food, water and shelter. Everyone is able to build strong storm resistant housing with the materials found on the islands. 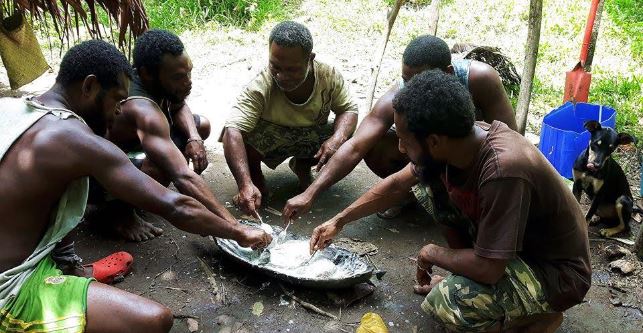 I was fascinated by this very simple way of living in harmony with nature. I learned a lot. I learned about plants; how they can be used to cure different diseases and soars. How plants can be used to heal animals and help other plants grow well. I learned about the old traditions, customs and way of life. I learned that the Ni-Vanuatu have deep respect for their surroundings and spirits. I also learned that all of this is fading away to the shiny 'development' with all its distractions. Forest is cut down or burned and coconut palms, coffee and cacao are planted in big plantations. I learned that trees are very important as they hold onto the water in the soil, release moisture and thus attract rain. I learned that coconut palms (not native to Vanuatu) have a very small root system and therefore struggle to hold the water in the soil and at the same time require loads of water to produce coconuts. All of this leads to drying of soil, rivers and springs, something the locals are beginning to feel the effect of. The lack of big trees is furthermore affecting the rain pattern and temperature in the villages. With the money they earn by the hard labor of processing the coconuts, they buy white rice lacking in nutrition and vitality, tin fish, instant noodles, sugar, white flour and candy. This causes previously non-existent diseases like diabetes, obesity, cancer and heart disease. Without knowledge and an established waste system, waste is disposed in several places like a thick carpet or it drifts to shore from afar, if it's not burnt over an open fire. More and more children are born, so each family's land becomes smaller and smaller. Many people want to live in the village with close access to work and the road to town. This forces people to make gardens in the same place for several years, which depletes the soil. Without the knowledge of how to build a healthy soil, the yields dwindle year after year. 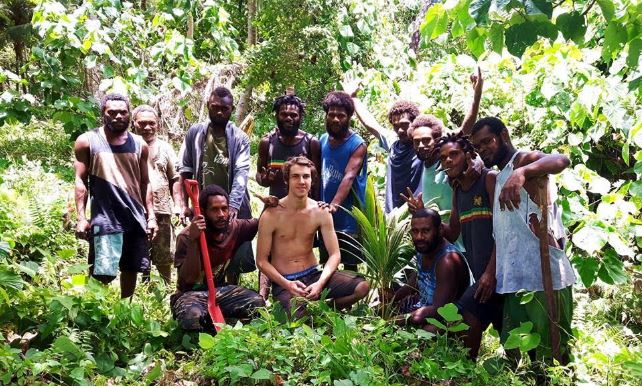 Will has seen this 'development' and the effects of it escalate during his life time. He wants to find another way. This is why he moved back to his own piece of land in the forest. He trained himself to live and survive in nature. He meditated on how nature moves. And he made laws to protect his land; not to cut trees, not to hunt or fish, not to create rubbish. He wants to return to his roots, the way the Ni-Vanuatu used to live. A group of young guys from the village and two of his brothers followed him, forming kind of like an Eco-gang.

Everyday people came to our kitchen to hear about how to protect and how to manage our environment, gardens, health and natural resources. When we visited other villages, people where interested in hearing what we had to share. I also started to collect rubbish in the villages, setting up baskets for trash at people's kitchens and all the kids helped me. Often some children would come running at me yelling; "Misses! Misses! Look!!" and they would hold up a battery or an empty can they had found. After proudly showing me their treasures they would put them in the baskets I had made.

Some elders from the neighboring village asked me to help them develop their village as they wanted tourists to visit. They thought it required concrete houses, sealed roads, processed foods, all what they have seen the foreigners use. I tried to make them understand that they with success could create Eco-tourism. By cleaning up the beaches and villages, planting back the forest, they can create a place of inspiration for others to visit. A place to connect with nature; live in bamboo huts, eat local food made according to tradition and learn about the culture and customs and the respect for all beings. A place which gives the opportunity to bridge indigenous wisdom and modern knowledge. I felt some comfort in the growing interest and understanding I was met with, a little hope that we can make a difference here before it gets too late. However, I wanted to go home again, and I knew that I could learn more from my mother who is a bio-dynamic gardener, knowledge which I could bring back. So I decided to abandon my idea of hitchhiking. After being away for 3.5 years I again set my feet on Danish soil. The cold almost made me turn around, but the loving embrace from my mum felt warming enough to make up for it.

I felt like Alice in Wonderland. I saw everything with new eyes. I observed in curiosity the trendy fascination of coconuts and overseas products. Coconut exists in all shapes and forms; coconut milk, coconut flour, coconut oil, coconut soap and so forth. On the label of many processed foods is coconut in one form or the other, not to mention palm oil. Cacao, coffee, bananas, avocados and other crops grown in monoculture also adorn our shelves. Why do we jump like sheep on one health trend after another that lures with antioxidants, omega-3, amino acids, vitamins, minerals, etc., from the other side of the globe, while our food is becoming more and more deprived by industrialization's forced feeding of plants and animals? Is it not better to eat what is adapted to our climate and needs? There is a reason why bananas don't grow in Denmark and strawberries only are available during summer. I also observed in wonder the large amount of unnecessary use of plastics. Have we not become more aware of the consequences? I further felt the discomfort of wearing shoes again and resisted for as long as the weather allowed.

I can see the world awakening, people gather and want change. I feel it. It's like a seed waiting to unfold and it's unfolding. 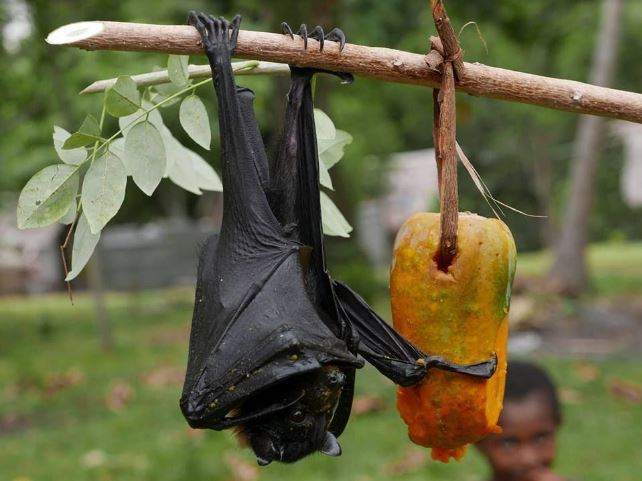 All photos by Elisabeth Holt

The sign above reads: Translated from Bislama: Welcome to Navus (name of the area). Navus is a place to learn, to look after Nature and to connect back with the roots .Mother Earth is important because she gives life to you and I and everything we need so we have to look after her. Some rules to follow; If you bring any rubbish like plastics, cans, batteries or anything which is able to spoil the land, please take it with you when you leave. Respect for every living being; tree, bird, river, fish, insect, plant, cat, dog, chicken, pig, children, women, man, etc. Not to cut any tress, fishing, or kill anything. We ask respect from everyone. 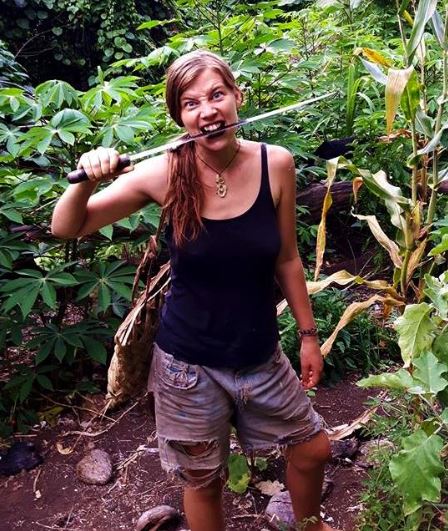